Guy Martin is an antidote to Top Gear’s Jeremy Clarkson. He looks like Wolverine in a racing suit and he’s much more pleasant to follow on Twitter.

In 2013, Martin attempted to break the British and Commonwealth Bike Speed Record that is held by Dave le Grys at 110 mph. Speed is the book that accompanied of the cult Channel 4’s series, where Martin seeks to find out how things go fast by exploring a range of engineering projects. 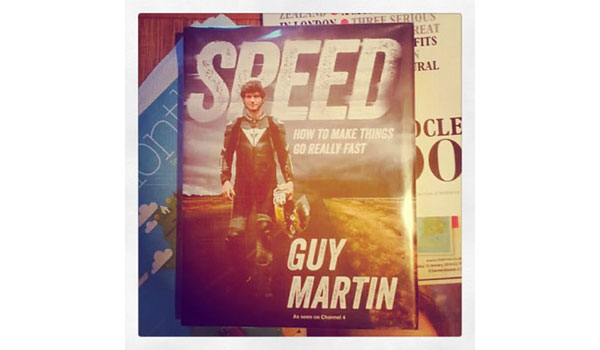 The chapters in the book are illustrated with cool infographics and great photography. Each speed science theory is explained with graphic examples from the wildlife such as dolphins, lizards and birds. Riding enthusiasts will find chapters such as the Science of Sliptream, the Science of Hydroplaning and Cavitation Effect pretty compelling.

GLUE really enjoyed the book. Guy Martin is the cool physics teacher we wish we had at high school. He made science looks sexy and fun.

Don’t forget to subscribe to GLUE’s free newsletters for exclusive posts that you won’t get elsewhere.

We write about what we like – cycling, running, fitness and letting off steam through active lifestyle. For any suggestions of activities we should experience and share, please contact hello@smellslikeglue.com

At GLUE Studio, a clean pair of trainers is a sign of a life half-lived.

Smells Like Glue is our notes on on running, cycling, meditating and active lifestyle. Anything but sitting down. Our aim is to transform the dull, sedentary lifestyle into an active existence.

After a spate of illnesses, our writers decided “enough is enough with the work-life imbalance”. So we took up cycling, running and bike maintenance (where the smell of the workshop inspired the blog’s name).

We constantly look for a better way to live, and to fit an active lifestyle around the jobs that we love to do.